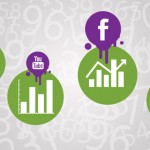 With so many different platforms to keep up with, it can be difficult to keep track of all the facts and figure floating around. To make sure you’re up to date when the new year arrives, we’ve compiled a list of 101 social media stats that every marketer should know. Covering all the major platforms from Facebook to Foursquare, you will be able to spend this month preparing your marketing strategy for 2013.

– One out of every seven minutes spent online is spent on Facebook (Source: ZDNet)
– That accounts for three in every four minutes spent on a social network (Source: ZDNet)
– In the U.S. Facebook’s mobile app gets over 78 million unique views (Source: Neilsen)
– Over 2.5 billion likes are made every day on and off the Facebook site (Source: C|Net)
– Over 300 million photos are uploaded onto the site every day (Source: C|Net)
– More than 3.5 billion pieces of content are shared on Facebook each week
– Facebook has over 550 million mobile users (Source: Simply Zesty)

– The average Facebook user only has 130 friends and likes 80 pages (Source: Mind Jumpers)
– Facebook is accessed by 7,000 different types of devices every day (Source: TechCrunch)
– The number of businesses that say Facebook is critical or important to their business has increased by 75% from 2009 (Source: Hubspot)
– 80% of U.S. social network users prefer to connect to brands through Facebook (Source: Hubspot)
–  56% of customers say that they’re more likely to recommend a brand after becoming a fan (Source: Mind Jumpers)
– Retail is the top industry that has acquired customers through Facebook (Source: Hubspot)

– There are over 2.6 million organisations with an active company profile on the site (Source: LinkedIn)
– 58% of U.S. internet users that earn $50,000 per year are on LinkedIn, while only 7% of those that earn less than $30,000 annually are (Source: Marketing Land)
– 61% use LinkedIn as their primary professional network, compared with 22% using Facebook and 4% using Twitter (Source: Social Times)
– LinkedIn is 277% more effective than Facebook and Twitter at lead generation for businesses (Source: Simply Zesty)
– LinkedIn generates more leads for B2B companies than Facebook, Twitter or blogging (Source: Social Media B2B)
– 65% of B2B respondents had acquired a customer through LinkedIn (Source: Hubspot)

– Twitter has over 500 million users signed up to the site (Source: TechCrunch)
– 40% of Twitter users rarely post anything but primarily consume content there (Source: Jeff Bullus)
– 53% of Twitter’s unique viewers use mobile (Source: AdAge)
– More than 350 million tweets are sent per day (Source: TechCrunch)
– 60% of Twitter’s users access the service via mobile devices (Source: Marketing Land)
– 17% of male internet users are on Twitter, compared to 15% of female internet users (Source: Marketing Land)
– U.S. president Barack Obama’s victory tweet was the most retweeted message on the site wiht over 817,000 retweets (Source: Slate)

– For every 100 million users on each social network, 197.3 Twitter users were likely to share an online story  comparted to 41.8 on Facebook, 15.2 on LinkedIn and 6 on Google+ (Source: UMPF)
– 77 of the world’s 100 largest companies maintain a corporate Twitter account, but media outlets are the most active users (Source: Jeff Bullas)
– The most followed brand on Twitter is @SamsungMobileUS with 3,658,000 followers. It’s closely followed by @ClaroRonaldo which has 3,557,915 followers and @iTunesMusic which has 3,390,650 (Source: Social Bakers)

– 500 years of YouTube video are watched every day on Facebook, and over 700 YouTube videos are shared on Twitter each minute (Source: YouTube)
– YouTube is available on 350 million devices (Source: YouTube)
– An auto-shared tweet results in six new youtube.com sessions on average (Source: Jeff Bullus)
– Red Bull is the brand with the most subscribers with 1,007,501. Apple is second with 804,753 subscribers while Playstation has 466,329 (Source: Social Bakers)
– More than 50% of videos on YouTube have been rated or include comments from the community (Source: Jeff Bullas)
– The most popular video is Gangnam Style with 887 million views and counting (Source: YouTube)

– Overall, 19% of female internet users are on Pinterest, compared to only 5% of male web users (Source:Marketing Land)
– 85% of a brand’s Pinterest engagement is organic, 15% of engagement happens on the brand’s board (Source:Curalate)
– The average Pinterest user has 171 pins, has 229 followers, 3 boards and 28 likes (Source: Social Fresh)
– The average order made on Pinterest is $80, double that of Facebook (Source: Shopify)
– For Shopify, the number of orders generated from pins in April 2012 had quadrupled in the space of six months (Source: Shopify)

– There are over 100 million registered users (Source: Forbes)
– Instagram has an average of 7.3 million daily active users, beating Twitter’s 6.9 million (Source: AllThingsD)
– More than one billion photos have been uploaded onto Instagram (Source: AllThingsD)
– When it launched on Android, more than one million people had registered with the app at a rate of 2,000 people registering per minute (Source: Silicon Republic)

– About 20% of Instagram users connect their accounts to Facebook each month (Source: Inside Facebook)
– The average user spends 257 minutes accessing the app in August compared to the 170 minutes spent on Twitter (Source: AllThingsD)
– During Hurricane Sandy, over 800,000 photos were taken and tagged with the hashtag #sandy (Source:Forbes)
– More than half (54%) of brands had adopted Instagram for marketing purposes (Source Marketing Land)

– 31% of Google+ users are based in the U.S., while the second most popular location is India which makes up 13% of total users (Source: B2B Social Media Guide)
– 63% of Google+’s membership is male, with the largest demographic in their mid-twenties (Source: Jeff Bullas)
– Angry Birds is the most followed page with 3,523,372 followers. It’s followed by Cadbury UK and Ferrari which have 2,767,907 and 2,221,323 respectively (Source: Social Bakers)

– Out of the six billion people on the planey, 4.8 billion have a mobile while only 4.2 billion own a toothbrush(Source: Mind Jumpers)
– We interact with our mobiles 40 to 80 times a day on average (Source: Cream Global)
– Time spent with social media on mobile apps and the mobile web is 161 million minutes per month (Source:Nielsen)
– The U.S. has the greatest number of active iOS & Android devices, standing at 181 million, China is second with 167 million while Britain is third with 35 million. (Source: Flurry)
– China is the fastest growing smartphone market, growing by 293% between Oct 2011 and Oct 2012 (Source:Flurry)
– 71% of all app sessions take place outside the U.S. (Source: Business Insider)

– There are over 500 million Android devices activated worldwide & over 1.3 million added every single day(Source: Silicon Republic)
– There are over 700,000 apps available in the Google Play store (Source: The Verge)
– The total time spent using social networks via apps is up to nearly 41 billion minutes yearly, seven times that of mobile web activity (Source: AllThingsD)
– More than a third of the times spent using social networking sites comes from app activity (Source:AllThingsD)
– Mobile accounts for 10% of Internet usage worldwide (Source: The Next Web)
– The average tablet user spends 13.9 hours per week with their device (Source: Hubspot)

– 46% of adult internet users post their own photos or videos online (Source: Marketing Land)
– 41% share/repost photos and videos that others have taken (Source: Marketing Land)
– 83% of social media customer service users have walked away from a purchase after a bad experience, compared to 49% of non-users (Source: AllTwitter)
– SEO has the biggest impact on lead generation goals, with 57% of B2B and 41% of B2C businesses saying it has the greatest effect (Source: Mind Jumpers)
– SEO also has the highest lead-to-close rate among common lead generation sources with 15%. Direct traffic accounts for 15% while referrals and paid search account for 9% and 7% respectively (Source: Econsultancy)

Your ads will be inserted here by

Please go to the plugin admin page to
Paste your ad code OR
Suppress this ad slot.